THIS COLUMN ORIGINALLY APPEARED IN THE APRIL 1995 ISSUE

THIS IS AN UNUSUAL MONTH, AT LEAST FOR AN APRIL. THIS YEAR,

the income tax deadline falls on the 17th, leaving little to distinguish the normally dreaded April 15 – other than that this 15th happens to be the 40th anniversary of Go Man Go’s maiden voyage up the racetrack.

Go Man Go, an aptly named horse if ever there was one, was foaled in 1953. Bred and born to the purple, Go Man Go was a son of Top Deck (TB) and the Cajun running mare Lightfoot Sis, a daughter of Very Wise (TB), thus combining the classic blood of Chicaro, Man O’War, Equipoise, Ben Brush and Commando on top, with the blazing speed of Old DJ and Dewey on bottom.

As a youngster romping the pastures on breeder J.B. Ferguson’s 6,500-acre ranch nearWharton, Texas, Go Man Go was fiery and spirited. Walt Wiggins Sr. once quoted the colt’s trainer as saying that the coon-tailed roan was “jes plain mean as a bear most of the time.”

“I broke Go Man Go,” recalled Robert Strauss, in the May 1988 issue of The Quarter Racing Journal. “I was the first one to ever sit on him. When we were breaking him, he ran off with me before we ever wanted him to run. I mean, just flat ran off with me.

“My brother, Eldridge was training for J.B. Ferguson, and after we started breezing Go Man Go, he told me one day, ‘I’m gonna put Bill (their younger brother) on this colt, and let you ride Mackay Jimmie, and I’ll bet you a fifth of whiskey the colt outruns the mare.’

“Well, I thought he was crazy,” Strauss continued. “this was a nice filly – she ran second in the Pomona Futurity –a nice AAA- (triple A minus) mare. But sure ’nuff, she broke a little in front of him, but he beat her, just for fun. We worked him one morning with a shoe half off in the back, and he worked :18.9 (at 350 yards), which was fast in those times. That’s the reason we come out here to Los Alamitos – we couldn’t get a price on him.”

They could at Los Alamitos. Already one of the top racetracks in the country, Los Alamitos attracted the best talent in both horses and horsemen. Go Man Go fit right in.  In his book “Go Man Go: The Legendary Speedhorse,” Wiggins quoted Scott Wells’ description of Go Man Go’s first race, in which the colt was ridden by Bill Strauss: “In his initial appearance, the flashy roan was the bettors’ favorite, probably because of some impressive workouts. The starting crew loaded the horses into the starting gate, began their moment of hustling from one horse to the other to try to ensure each competitor an even break, then stood helplessly as Go Man Go reared, flipped, unseated his rider, and finally broke through the front of the starting gate and dashed down the track in a gallop.

“The colt galloped by the stands, around the clubhouse turn and all the way down the backstretch and into the homestretch turn before the outriders were able to head him off and catch him. Then they returned to the starting gate, put the boy back on his horse, loaded them into their stall and sprung the latch. Go Man Go darted to the front, opened up a wide lead and held it firmly to win by a nose.” In a sport of blanket finishes and nostril-wide margins, Go Man Go won his next five races by a combined distance of more than nine lengths. The colt finished the year as the first freshman to be world champion, repeating the triumph in 1956 and ’57. Go Man Go retired in 1959, with his $86,151 making him at the time the richest racehorse in the sport.

So here we are, tipping our collective hats to the sprinter that arguable was the greatest racing Quarter Horse in history, while facing the upcoming 15th without much else to do.

Not that I’m complaining. 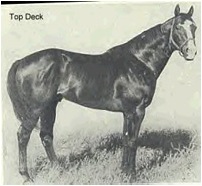 roan stallion was sensational on the track, and he proved to be just as great a sire as he was a runner. For several years he was the leading sire of money earners, and he is the all time leading maternal grandsire [November 1983].

In 47 lifetime starts, he put together a record of 27 wins, nine seconds and three thirds, with earnings of $86,151, to be leader of his day.

Jockey Robert Strauss, who rode Go Man Go during most of his career, was quoted in the April 1958 issue of the Quarter Horse Journal, “Go Man Go is in my heart,” he said. “He is a good natural horse. He loves to run at all times, and I always get a thrill when riding him. But he does have funny ways. It is terribly hard to gallop him with a grey pony because when he was a three-year-old he fell in love with a grey pony and still remembers it.”

Go Man Go did double duty, in the stud and on the track after his four-year-old campaign. In 1959, before his small, first crop had competed, Frank Vessels, Sr.

and W.H. Peckham bought the young stallion for the unheard of price of $125,000. Eventually Harriet Peckham became the sole owner, and the horse stood at Buena Suerte Ranch during he early seventies.

From 942 foals and 778 starters, Go Man Go saw 555 of his babies reach Register of Merit standard. Among them were 83 stakes winners and 63 stakes placed. Forty ran AAAT times, 272 ran AAA and 236 ran AA. They had combined earnings of $7,629,895. Only Easy Jet and Dash For Cash, whose babies are running after today’s much larger purses, have sired with greater total earnings.

dam of Rocket Wrangler; granddam of Dash For Cash.

Bedawee, etc.; 3rd dam of Check Him Out

dam of Easy Kiss; granddam of Such An Easy Effort;

dam of Shake It To em

ReallyRapid
dam of By Yawl

dam of Especially For You; granddam of Rare Form

Go Man Go’s daughters have gone on with the job as broodmares. Through 1982, his daughters had produced 792 Register of Merit qualifiers. Their starters had earned $10,283,360. By comparison, his closest rival as a broodmare sire was Jet Deck, whose grandchildren have earned $7,604,303 through the end of last year.

In 1982 alone, Go Man Go’s daughters produced 105 Register of Merit qualifiers and 161 individual winners with earnings of more than $1.3 million.

While Go Man Go spent the last few years in comfortable retirement at Buena Suerte, his get kept his name to the forefront on the track and at stud, as they will continue to do for years to come. 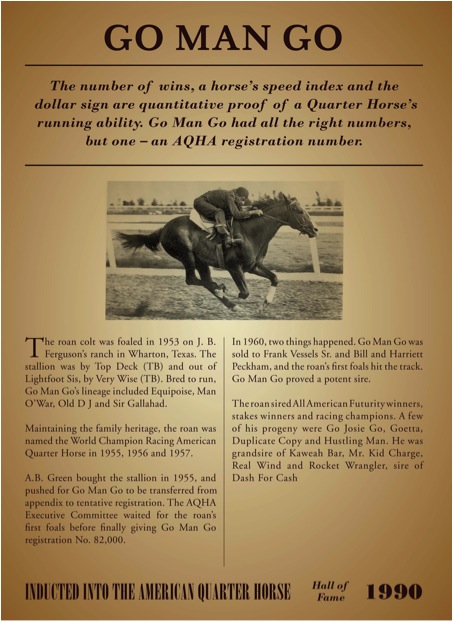 One Response to Go Man Go