The Gold Coast Magic Millions in June is a great time for breeders to replenish their broodmare band or just look at quality thoroughbred horse flesh, and so it was for us at Sullivans Run
not just to look but hopefully to purchase a broodmare that would throw a quality foal to put back through the yearling sales in a couple of years.
After two days  it was time to take in the hospitality of a couple of the stalwarts of the Queensland sprint racing industry in Steve Hogno & Ian Rosenow.

Steve and Deb were kind enough to give me the time to have a look at their broodmare band as well as all the young stock they have coming on, the broodmare band would have to be one of the best bred quarter horse sprint mares
in the country. Due to time restraints we were unable to look at all Steve & Deb’s stallions, but one we did get to see was a grandson of vain (TB) Truly Vain( a track record holder in the toowoomba area) who is a terrific type and will be a great outcross for some of their mares, ensuring Birdhouse Stud have a competetive group of race/competion horses if sprint racing ever takes off. The conversation as always with sprint people turned to the future of sprint racing and a lively discussion produced a lively debate on the industry as a whole.

Ian Rosenow and his wife Irma were my next call, Ian had just arrived home from a knee replacement so I probably got him at just the right time as we sat and talked sprint horse for a number of hours, Irma was good enough to show me the horses the day before as well as great hospitality, as Ian was still in Hospital. Ian and Irma were a wealth of information and like Steve and Deb great company and we could have discussed bloodlines & Sprint racing etc for days let alone hours. 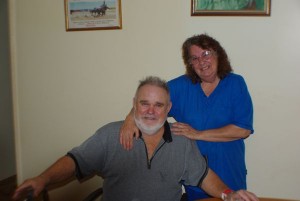 The Hopes of just these two families is amazing as they have given up so much to hopefully realise a dream that is struggling to eventuate. Will sprint racing eventuate? who knows but at the moment the number of people still waiting is dwindling by the year or have well and truly gone. Not a lot of information has been written about the Industry over the last few years and this site hopes to bring you another view of current happenings in future articles.