Great Horses Of The Past

From the word GO, he was a champion. Go Man Go would dominate the American Quarter Horse racing scene like no other in history. Aptly named, Go Man Go was foaled in 1953, and although neither his mother nor father raced, he quickly proved he had the ability of a champion. In his career, Go Man Go earned many honours. 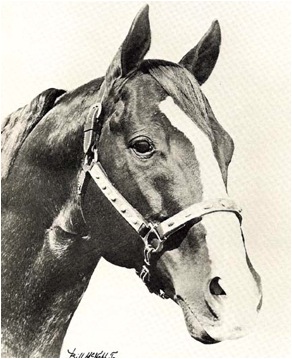 Three times he was named World Champion Racing American Quarter Horse, including becoming the first 2-year-old to ever claim that honour. He earned multiple divisional titles, set three track records and a world record, equalled a world record and became one of the greatest sires in American Quarter Horse racing. Go Man Go died on October 14 [1983] at Buena Suerte Ranch, Roswell, New Mexico at the age of thirty. The strawberry roan stallion was sensational on the track, and he proved to be just as great a sire as he was a runner. For several years he was the leading sire of money earners, and he is the all time leading maternal grandsire [November 1983]. Go Man Go is one of only two quarter horses to win World Champion Quarter Running Horse three years in a row (the other was the mare Woven Web). He raced until he was seven, winning 27 races, and although his $86000 in winnings may not seem like a lot, it was in the 1950s
Go Man Go was a horse with issues. To say he was difficult is an understatement, but there’s no doubt that some of the most unruly horses can go on to be fast, if you can just find a trainer that can get them safely onto a racetrack! Being difficult was in his blood – his sire, the thoroughbred Top Deck, was well known as a problem horse. Top Deck never made it to the track himself, and neither did Go Man Go’s mother, a little mare from Louisiana named Lightfoot Sis. But both horses were beautifully bred, and it’s a shame that Top Deck was injured as a yearling, and Lightfoot Sis was blind in one eye, because we’ll never know how fast they could have been.

Go Man Go had other problems too. Top Deck was a thoroughbred, and Lightfoot Sis was only part quarter horse. Go Man Go didn’t get full AQHA registration until his racing career was nearly over, in 1958. It came down to what he looked like, and eventually his registration was validated when his offspring all looked more like quarter horses.

Like some of the most notorious racers, Go Man Go was hard to train, hard to groom, and hard to ride (although it was said he loved having his lower lip tugged). His trainer said he was ‘jes plain mean as a bear most of the time’. His jockey, who also rode him to break him in, said ‘he ran off with me before we ever wanted him to run. I mean, just flat ran off with me.’ On another day, Go Man Go ripped off half a shoe but still set blistering training times. Basically, there was no stopping Go Man Go.

In his very first race, they left him waiting in the starting gate a little too long. Go Man Go got fed up, threw his jockey in the stalls, then broke down the gate and set off down the track. He did a full lap of the track, a long way for a quarter horse. Even so, once they caught him and got him back in the starting stalls – and this time got the race going right away – Go Man Go had enough energy and spirit left to win the race easily.

As a two year old, Go Man Go attracted a lot of attention. A wealthy horse trainer, A.B. Green, wanted to buy the horse from his breeder, J.B. Ferguson. Ferguson didn’t want to sell, so he set the price at $42000, thinking Green couldn’t find that kind of money. But Green did, and Ferguson lost his prize horse – but he did have Go man Go’s full brother Mr. Mackay. Ferguson wanted Go Man Go back, and when Green made him angry by saying his latest expensive purchase, Double Bid, was the fastest in his stable (faster than Go Man Go), Ferguson took action. He entered Mr. Mackay in a race against Double Bid, and bet Green 42000 against Go Man Go that Mr. Mackay would win. Go Man Go’s brother did him proud, winning easily, and bringing Go Man Go back home to Ferguson.

Go Man Go went on to win so much that near the end of his career it was hard to find horses that were willing to race against him. He did have long time rivalry with a horse called Vandy’s Flash, who tried twelve times to Beat Go Man Go. He did manage it once, in 1959, in what turned out to be Go Man Go’s very last race. When Go Man Go retired, he held two world records as well.

In 47 lifetime starts, he put together a record of 27 wins, nine seconds and three thirds, with earnings of $86,151, to be leader of his day.

Jockey Robert Strauss, who rode Go Man Go during most of his career, was quoted in the April 1958 issue of the Quarter Horse Journal, “Go Man Go is in my heart,” he said. “He is a good natural horse. He loves to run at all times, and I always get a thrill when riding him. But he does have funny ways. It is terribly hard to gallop him with a grey pony because when he was a three-year-old he fell in love with a grey pony and still remembers it.”

Go Man Go did double duty, in the stud and on the track after his four-year-old campaign. In 1959, before his small, first crop had competed, Frank Vessels, Sr. and W.H. Peckham bought the young stallion for the unheard of price of $125,000. Eventually Harriet Peckham became the sole owner, and the horse stood at Buena Suerte Ranch during he early seventies. 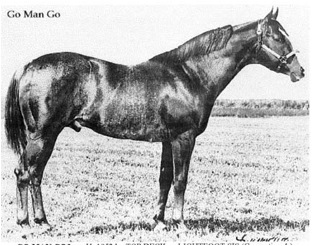 From 942 foals and 778 starters, Go Man Go saw 555 of his babies reach Register of Merit standard. Among them were 83 stakes winners and 63 stakes placed. Forty ran AAAT times,   272 ran AAA and 236 ran AA. They had combined earnings of $7,629,895. Only Easy Jet and Dash For Cash, whose babies are running after today’s much larger purses, have sired with greater total earnings. Go Man Go’s daughters have gone on with the job as broodmares. Through 1982, his daughters had produced 792 Register of Merit

qualifiers. Their starters had earned $10,283,360. By comparison, his closest rival as a broodmare sire was Jet Deck, whose grandchildren have earned $7,604,303 through the end of last year.

In 1982 alone, Go Man Go’s daughters produced 105 Register of Merit qualifiers and 161 individual winners with earnings of more than $1.3 million.

While Go Man Go spent the last few years in comfortable retirement at Buena Suerte, his get kept his name to the forefront on the track and at stud, as they will continue to do for years to come.

dam of Rocket Wrangler; granddam of Dash For Cash.

dam of Easy Kiss; granddam of Such An Easy Effort;

dam of Shake It Toem

ReallyRapid
dam of By Yawl

dam of Especially For You; granddam of Rare Form

2 Responses to Great Horses Of The Past