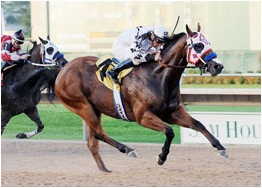 Stolis Winner earned the majority of his record earnings during his world championship campaign as a juvenile in 2008. He earned Quarter Horse racing’s highest honor on the strength of Grade 1 victories in the All American Futurity, Heritage Place Futurity and Rainbow Futurity.

Noel Balderas’ XO Kate (Stoli-Streakin Kate by Streakin Six) was just a neck behind Stolis Winner in the 2010 Bank of America Sam Houston Challenge and is back for another try against the former world champion. The 6-year-old mare is in top form with two wins at Louisiana Downs in her only two 2011 starts. She narrowly won the Harrah’s Distaff and then easily took the Swift Stakes for trainer Isidro Flores.