The greatest sire of all time and his legacy will continue for a long time to come, the news article below will briefly touch on his death with more to follow.

LOS ALAMITOS, CA—NOVEMBER 26, 2010—The entire family of Los Alamitos Race Course is saddened by the news of the passing of the greatest Quarter Horse stallion in our generation. Rest in peace First Down Dash.

“He laid down and went to sleep, peacefully, yesterday morning,” said Bonnie Vessels of Vessels Stallion Farm. “He was missing Scoop and his sunflower seeds,” she said referring to her late husband Frank “Scoop” Vessels.

Ed Allred, the sport’s all time leading breeder, released the following statement about First Down Dash. “First Down Dash is unquestionably the greatest stallion of all time. No horse has had the influence of the great First Down Dash. He was an amazing horse. He was a sire of sires. What an incredible and great career…. He was in one word ‘Amazing’.” 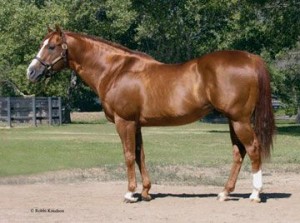 Bred in Oklahoma by A.F. Stanley Jr., and B.F. Phillips, Jr., out of the Gallant Jet mare First Prize Rose, First Down Dash surpassed the legacy at stud that started with his own sire, Dash For Cash.

Mildred Vessels purchased the phenomenal horse at the Phillips Ranch Yearling Sale in the summer of 1985 for $97,000. He was one of the first yearlings broke at the new Vessels facility near Bonsall, California.

Trained by Mike Robbins, at 2, the colt won five of six starts including the grade 1 Dash For Cash and Kindergarten futurities, while earning $518,120. Champion trainer Blane Schvaneveldt took over training duties in 1987 to saddle the sorrel speedster to eight wins in nine starts. Those wins included the Champion of Champions(G1), Los Alamitos Derby(G1), QHBC Championship Classic(G1), Dash For Cash Derby(G1) and Laddie Handicap(G2).

Under the guidance of Scoop Vessels, First Down Dash got off to spectacular start as a stallion by siring the winners of the rich All American Futurity(G1) in each of his first three crops to race.

In 1993 Vessels syndicated the stallion for $7 million, the first successful syndication in Quarter racing industry since the late 70’s early 80’s. The investor’s earned tremendous returns and it opened a market for Quarter Horse stallion syndicates that continues today. 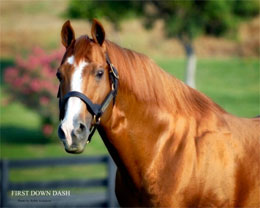 First Down Dash in his paddock at Vessels Stallion Farm near Bonsall, California.

He will be missed by all.